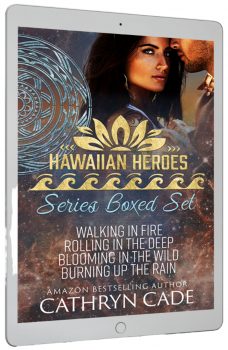 These Hawaiian heroes are out to save their island… but can their hearts survive unscarred?

For centuries, the Ho'omalu have protected the Big Island for their goddess Pele, while she sleeps beneath her volcanoes. But the battles they now face are the deadliest yet, as a California crime family attempts to move their illicit drug empire to Hawaii. Which will prevail, the paranormal powers of Pele's guardian warriors… or pure evil?

Passion blooms on a Hawaiian beach… but danger lurks, hot and deadly.
When a young food blogger visits paradise, she falls for a big, handsome Hawaiian… but with glamorous women at his beck and call, she doesn't expect him to notice a freckle-face blonde like her. Until danger throws them together, and passion flows like molten lava on the flanks of Pele's volcano.

Rolling in the Deep
Hawaiian Heroes, Book #2 by Cathryn Cade

Desire as dark as the deep Hawaiian seas… danger poised to strike.
On Hawaii, for her best friend's wedding, a young tourist falls hard for the groom's brother. But the big, tough, tattooed Hawaiian has secrets too dark to share…until passion explodes between them. Caught in desire's net, can he keep her safe and rid his island of evil drug runners…or will he have to choose?
Blooming in the Wild
Hawaiian Heroes, Book #3 by Cathryn Cade

Tropical romance blooms deep in the Hawaiian jungle… but deadly peril is close behind.
A young sporting goods exec leads a team of models and photogs into the remote Hawaiian jungle, for a photo shoot against the backdrop of tropical blooms, along with a cocky, handsome, adventure TV star. But someone wants her plan to wither on the vine. They may even want her dead. Good thing she has a hero close at hand… and a forest that seems to know what she needs, even before she does.

Burning Up the Rain
Hawaiian Heroes, Book #4 by Cathryn Cade

Their hook-up is hot enough to set the rain on fire… but danger looms behind the storm.
When a Hawaiian beauty discovers she can ignite storms over the Big Island, she resolves to use her new powers to drive away crooked developers. But to evade the arranged marriage her mother is brokering, she'll need human help. A semi-public hookup with a handsome Realtor from California should cover it. They uncover a sizzling passion that neither can deny… what will happen when he learns she's no ordinary society girl?

> Get the ebook @ Amazon or read FREE in Kindle Unlimited

5 Stars. Romance, suspense and steamy sex, with a splash of the supernatural! And all on the Big Island of Hawaii. Hats off to Cade.
Guilty Pleasures Book Reviews
4.5 Stars. Sensuous and thrilling tales set among the lush jungles of Hawaii. Cade knows her locale and drops in very real characters!
Fresh Fiction

Books in This Series 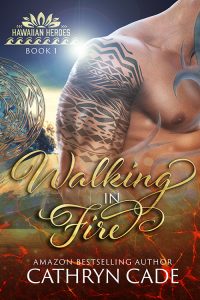 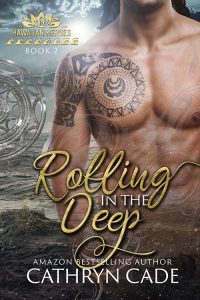 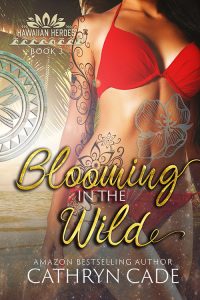 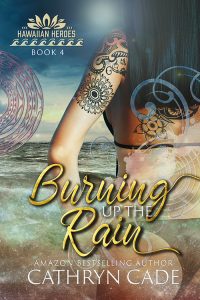 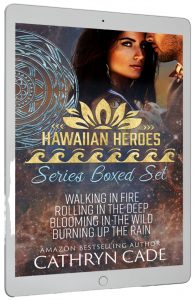