THIS SEXY, DANGEROUS BOX SET IS READY TO PRE-ORDER NOW!

Ready to meet your next book boyfriend? How about 22 of them?

Prepare to ignite your nights with some of today’s hottest contemporary romance novels, starring the baddest of bad boys, bikers, billionaires, and more!

Cathryn Cade  along with
Catherine Vale writing as Kate Nova 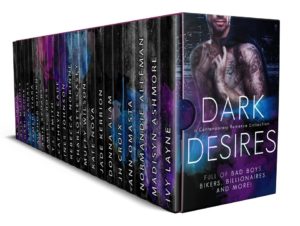 Free Bonus Gift for those who Pre-order – An exclusive Dark Desires Coloring Book! After you purchase, click here to receive your gift: http://www.subscribepage.com/darkdesiresgift (no subscription necessary)

And don't forget, Book 1 in the series is FREE to Newsletter Subscribers! With nearly 70 5 Star reviews on Amazon, it's gotta be a fun, sexy read.

EXCERPT from HONEY IN THE ROCK;

Her real world can be even wilder than her fantasies… if she dares.

Don’t miss this dark, sexy ride through danger, as another man of the Devil's Flyers MC learns that love's sweetness is worth the sting!

“Devil's Flyers women do not look after themselves,” Rocker growled. “Appreciate that you’re tryin’ to stand on your own two feet, and be a grown-up and all that, but you got a club of brothers behind you now. When you have a problem, you bring it to us.”

When she didn’t answer, he looked over at her. “You gettin’ this?”

“Trying to be a grown-up?” she repeated, wishing she could smack him on the shoulder with her bag—which was heavy, because it had her lunch, coffee mug and water bottle in it. “I’m twenty-four. I’ve been being a grown-up for some time now.”

“Twenty-four. Yeah, you’re practically an old hag.” This time he grinned at her, and the effect, his eyes crinkling at the corners, white teeth flashing in his tanned face, amongst his ‘stache and goatee, was so startling she forgot to be mad at him for calling her a kid, and smiled back, her insides melting in a puddle of marshmallow goo.

His gaze flicked to her mouth. Then he looked back to the street, slowing for an ambulance to negotiate an awkward turn ahead of them, and exchanged a finger-lift with the other driver.

She continued to stare at him, not only because once a female looked at his rugged profile, it was difficult to look away, but because all the things he’d just said added even more layers to the bad-assery that surrounded him like an aura. He was an old-fashioned chauvinist, yes, but he was also protective and even nice, in his extremely forthright way. Since she’d grown up with an ex-Marine dad, this did not bother her as much as it might have.

If Rocker were a character in one of her games, he’d be a rogue warrior—a paladin—with a huge sword in his hands, wearing leggings and a wide belt, maybe even a kilt of sorts, but his upper body would be bared to reveal his heavy muscles. His hair, she wouldn’t change at all.

And his face … not a single, solitary thing. It was perfect.

His mouth quirked, and the corner of his eye closest to her crinkled. “Babe,” he reproved. “Why you always stare at me like that?”

She blinked, and then said a silent ‘eep!’. He'd caught her. Still, she tried to brazen her way out of it. “I don’t stare at you.” She totally did. He was  … well, everything. How could she help staring?

Quarking laser balls. She was so busted. “Sorry,” she mumbled, turning to gaze out the window, her face flaming. “I won’t do it anymore.”

They pulled to a smooth stop under the portico of the main patient entrance. Inside, it was brightly lit, but other than the middle-aged orderly waiting inside the automatic doors beside an empty wheelchair, no one was around.

“Didn’t say I minded,” Rocker pointed out, turning to drape one long arm over his steering wheel and train that devastating gaze on her. “Just wondered why.”